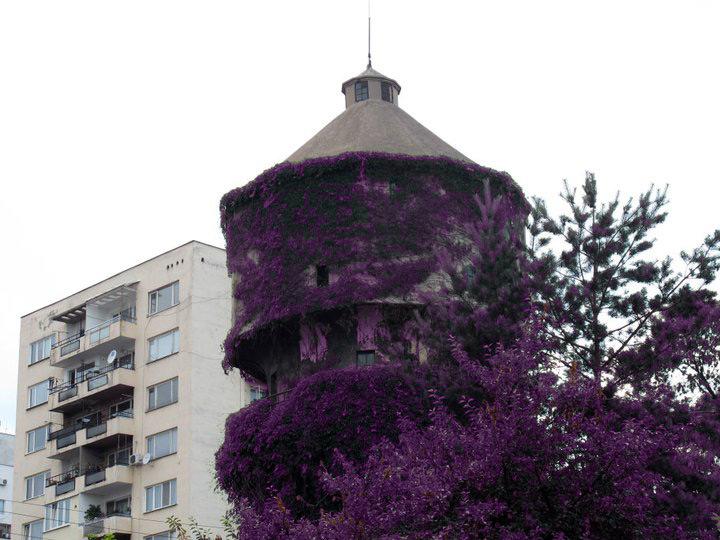 When and how it all started

Since 2006 NGO – IME (ime.sonance.net) has initiated art events around and in the abandoned and neglected for decays Water tower (currently not in use) in the area of Lozenetz – Sofia and also the train station Poduene 2007.

The first year the idea was involving cleaning up the space around the Water tower as a statement for the local community and not only, with the aim to attract the authority’s in charge attention and take care of such valuable from architectural and historic point of view buildings – populating it with fresh energy expressed at that time through the music of musicians part of the NGO and also artmospheric.org and the New castle DJ producer team sharing their wonderful music and visuals with us.

Next edition of the Art fest was “Chisto – Clean” at station Poduene 2007 – a place notorious with its bad reputation were we cleaned it and projected short films inside the hall; outside we had a musical concert for a day including the minority social groups taking part in the activity as well as addicts in rehabilitation process from a private clinic Kantchelov and under supervision of social workers.

The next issue of the Water tower art fest 2008 was under the motto of – Urban Guardian Angels; it involved more of the municipality of Lozenez in Sofia support;

the garden around the tower was cleaned again, this time presenting video installations inside the tower as well as short films and installations, a photo contest was launched and a concert in the close by area.

During the third year in 2009 of the artists initiative, the whole of the space around the tower was inhabited with workshops of different kind, such as: restoration of an old furniture, car boot sale, compost workshop and also ecological way of life workshop, and in the evening there was screening of experimental and art films for 3 days; inside the tower after a call of proposal a few video installations were chosen and artists from Europe and Singapore and Armenia came and presented their works.

The initiative has developed from a small idea of making the building known and used for non-commercial purposes raising an awareness of inhabiting urban areas with more dignity and notion for past and future as an intrinsic part of our life.

The theme “Clairvoyance” was the idea that brought together a multitude of interests. It assembled the efforts of organizers, the creative energy of artists, the support of public institutions and local business and coupled with the unending enthusiasm of the visitors of the Water Tower Art Fest.

The event awakened the sensitivity and to cultivate the interest of audience members for the way contemporary art addresses current social topics such as: modern life in large urban areas, lack of communication and common ground for discussion among opposing social strata, and the loss of connectivity with nature coupled with the abdication of responsibility for its maintenance.

We estimate that the goals of the project: socialization of abandoned city terrains, decentralization, inclusivity, attracting new audiences and diversifying the offerings for contemporary art in the capital were successfully met.

The 2010 edition of the Water Tower Art Fest took place within five days (June 25th – 30th)  in three location in and around Sofia: 1) the old water tower of Lozents; 2) the rotunda and old city bath in Bankia; and 3) the subterranean gallery with remnants of antique Serdika (now Sofia) located on the corners of blvd. Maria Luiza and Ekzarh Josif str.

More then 30 artists representing the countries of Sweden, Spain, France, UK, Turkey, Armenia and Bulgaria lent their creative energies to the festival. Apart from presenting original works, installations and performances the artists conducted workshops for children and adults and participated in a open debate entitled “Alternative Art Spaces” held on June 28 in the courtyard of the water tower in Lozents. The festival program was supplemented by musical performances by Bulgarian artists such as “Popara” and DJ Cinnamint, which our visitors could enjoy while making purchases at the artisanal art market set up on the festival grounds.

Thanks to its diverse programming and well executed marketing strategy the forth edition of the Water Tower Art Fest was the most successful so far. We had 900 visitors who represented a wide socio-demographic range.  On the opening day (June 25th) at the courtyard of the old water tower welcomed 400 visitors, friends, the media, local residents and fans of contemporary art and music. The audience showed their appreciation for the creative adaptive reuse of the old water tower (built in 1929), whose interior was outfitted with video and audio installations that featured the most up-to-date technology available to artists. Thus the exhibition roped together the mute artistry of the tower itself with the outspoken images and sounds of the contemporary artists.

Main venues: Water Tower in region of Lozenets –The tower has been designed by an Austrian architects and build in accordance to French school of building of water towers in 1920s. It stands out with its unique construction and is one of the most interesting architectural sites in the region of upper Lozenec.

Its has quite a logical history behind its rising necessity – to play the important role in bringing water to the higher ( at that time 2 and 3 floor) buildings in the region, situated at the level or higher to the main reservoir in Lozenec, east of the seminary. The architect had in mind that the building would also be used as a watch tower and the citizens of Sofia will take pleasure in watching the view of the city center and the Vitosha Mountain. With its incredible resemblance to a medieval architecture and design, it stands out amongst the buildings of mid 50’s block of flats.

Underground known as the Tower of Serdika – archeological remains of the fortress around the capital of Bulgaria Serdika.  The basement hall of the corner building gives just a glimpse of what the massive wall must have been and how it surrounded like a belt the ancient main city of Serdika. It defined the size of the city for centuries until its final demolition in 15th century after the Ottoman conquest. It was built in 176-180 years, by the roman emperors Mark Aurelius and Commodious.

An old bath close to Sofia n Bankya – build by Zar Ferdinand in the beginning of last century with the purpose to play a role of rehabilitation place and leisure – aesthetically reinforced by its marble sinks and basins and spacious spaces. Today the Big Bath in the town of Bankya, the masterpiece from the beginning of the last century of balneological building, and its territories are abandoned and deserted.(currently under construction started by Municipality of Sofia induced by our actions there in 2010)

Where the atmosphere is friendly and understanding

Should it be dealing with cutting edge issues like politics, gender issues, nudity, homosexuality, tolerance towards other ethnicity and minority groups, Respecting other cultures religions and a friendly attitude towards the environment.

All of this done in unusual gallery spaces – like abandoned beautiful buildings with uncertain status and owners, let to be demolished by time and climate.

By populating them afresh with ideas, of non familiar with the situation, artists brings a completely different perspective to the viewers, local citizens, owners of building( in case of private ) or Municipality and  governmental structures- giving them ideas for further development of a particular building, region or social  issue. We are partaking and building a civil society where it doesn’t exist or just old forms of it left. We are helping to fill in a generation gap by taking an active stand on a local level.

By inviting the artists to respond naturally through their artistic talents to a space we provoke our own creativity and ability to see a place, a person/s anew.

The bottom line is:  by inviting to view contemporary art in alternative art space – we invite local people to view and understand the different and raise a dispute over the quality of life in a communal spaces such as are the cities. By accepting the otherness we incite the tolerance towards others and accepting the deviance within ourselves. So the level of tolerance will be pushed further away from the rigid understanding of the world. Thus is not provoking a chaos or anarchy, but a mere co- existence in a small community, a city, a country and so forth.

On a local level we draw a line between the free creativity of persons and elitarian way of looking or partaking in art and the way it could change ones life for the better.

On an international level we induce the communication so to develop a further inspiration by local showcases.

Local art scene ( in our case the Bulgarian art scene)  is restricted by default only to the professionals dealing with art. As far as the mass consumer is concerned with art – it falls in the category of craft or decoration with not much more quality than a mere colour coordinated object fitting into their interior design. By presenting artifacts by contemporary artists dealing in a creative way to the specific surroundings we bring closer to the audience and artists themselves. The audience is specifically intrigued because the exhibit is done in a familiar form their past ( the older generation) spaces reminding them of the specific purposes those buildings had played in the past , while the younger generations experiences the quality of certain aesthetics and how it all fits within the nowadays scene. The artists get to a certain point where they take a stand for the situations they find themselves in and the power art has over any community. And the sentence that “To be an artist you have to be a brave human being “– justifies itself and brings back the slightly forgotten or rather shifted purpose of art to its deserved place within society.