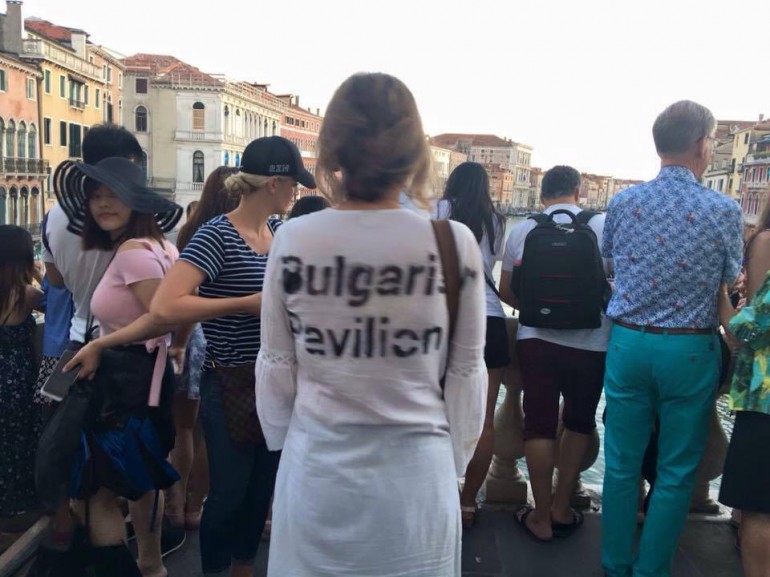 „GREETINGS FROM THE BLANK SPOT“

I have decided to publish my proposal for curatorial project to present Bulgaria at Venice Biennale in 2019. The selection was made and a different project was chosen to present us. Nevertheless i think it is important to share our visions.

Since 1964 we, as a nation have abdicated from participation at this most prestigious forum of contemporary arts and have not declared any desire for participating on national level.

Despite frequent forays to apparently blind and deaf to such complaints Ministry of Culture (with some exceptions lying on personal interests) that it is of particular importance to us as Bulgarians. And the sporadic personal participation of ambitious curators and artists, without representing the nation in any way, through a consensus of their participation, can not replace the status of a National Pavilion.

In 2017 also on base of a personal initiative, I presented Bulgarian Pavilion, with performance action supported by Chinese collective. Whether it has unlocked or helped us decide on our participation, I can not say.  but I think that even the image of a spray-coated back on my white dress “Bulgarian Pavilion” has provoked somewhat the Bulgarian public, or at least those who know how important this forum is.http://nia.watertowerartfest.com/?p=919

Through our participation, we declare ourselves as a nation in modern times 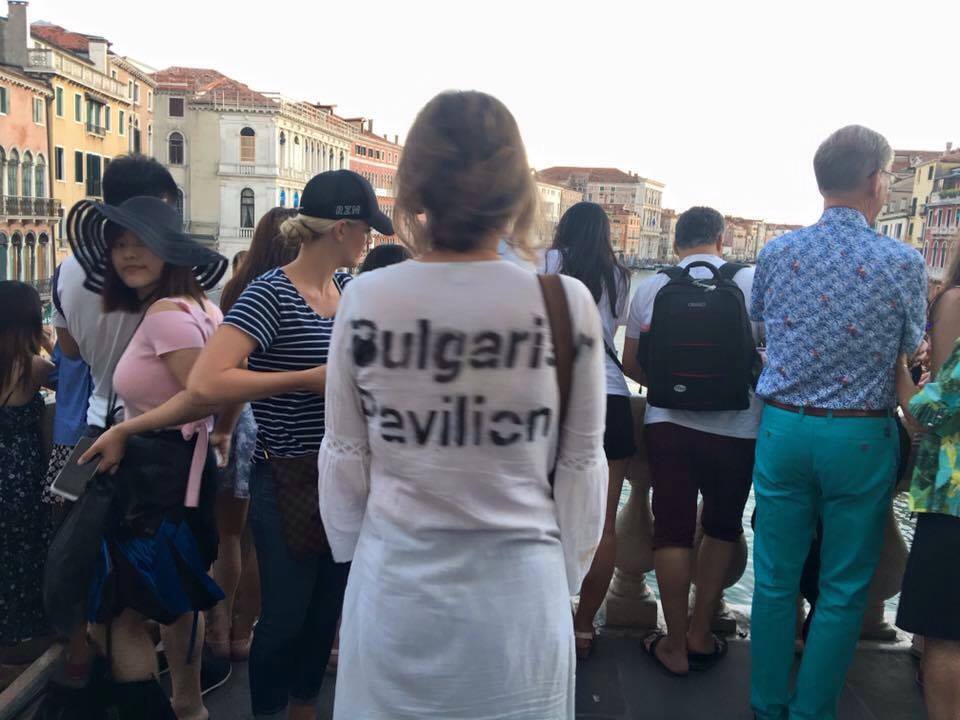 In the context of the theme of the 58th Venice Biennial, the idea is related to the resulting dynamics of the Chinese curse “Live in Interesting Times” where everything is possible. Like the use of omnipotent digital information, a fake news, and the choice of whether or not to recover from the white field of collective memory loss. A white spot in the psycho-geographic map of the world. Where nobody returns from, because they do not know where it is. Where there are whole nations, despite their diminished visibility. Just by declaring we engage even with our own existence.

„May You Live in Interesting Times springs from a belief that interesting art creates forms whose particular character and delineation raise questions about the ways in which we mark cultural boundaries and borders. Intelligent artistic activity involves creating forms that call attention to what forms conceal, and the functions that they fulfil. The Exhibition will highlight art that exists in between categories, and which questions the rationales behind our categorical thinking.

Finally, May You Live in Interesting Times will be formulated in the belief that human happiness depends on substantive conversations, because as social animals we are driven to both create and find meaning, and to connect with others. In this light, the Exhibition will aim to underscore the idea that the meaning of artworks are not embedded principally in objects but in conversations – first between artist and artwork, and then between artwork and audience, and later between different publics. Ultimately, Biennale Arte 2019 aspires to the ideal that what is most important about an exhibition is not what it puts on display, but how audiences can use their experience of the exhibition afterwards, to confront everyday realities from expanded viewpoints and with new energies. An exhibition should open people’s eyes to previously unconsidered ways of being in the world and thus change their view of that world.“ Ralph Rugof

Our modern nation-psychology is related to a personal and collective abdication of the Bulgarian himself, to recognize or rather to make his own point of view. He is convinced that, in addition to being inadequate and undesirable from the rest of the attractive active world (think the West), with its own self-esteem and “valid” viewpoints, it is equally insufficient for itself. That’s why he copied – imitating values. We have made temples of such, through the skillful benefactors –  the contemporary architects of our nation’s weaknesses, such as indifference, cowardice, grooming, alienation, tendency to corruption and loyalty.

Imitation (from Latin: imitatio, “copying” 1) is a specific behavior in which the individual observes and repeats behaviors, gestures, clothing, and so on. to another individual. the word imitation can be applied in many contexts, from animal training to international politics [2].

“The societies, as well as the crowds, are governed by the instinct of imitation and cowardice.” – Marcel Proust

The simulation of happiness is one of the most treacherous ones that has brought us to a distance from our true nature, rightfully belonging to us. While shifting, by copying the happiness of others, has become our first nature.

Copying and imitation go as far as to conclude that we have consciously lost any connection with ourselves as humans, and we continue to copy with that amazing expectation of assessment in the eyes of naive children, even if they themselves know they are they lied and did not do their homework, but they think … will somehow pass. This “somehow will pass” is at the root of copying everything that has been given to us by the Western world. Copying is like a special kind of drug that gives you a connection with something that makes sense, and even if you do not understand it, play it safe by copying it. Moral values, fashion, way of speaking, raising our children, urban planning, music, art, political decisions, etc. Without being even slightly intrigued by what might possibly be lying neglected and precious under your feet. You imitate in exalted excitement and at the end what you get is that, with the act of copying yourself, you consume valuable energy and make incredible connections through what you learn while copying. And somehow you are surprised when you see the result, which is no worse than the original itself, and somehow resembles something vaguely familiar deep within you, which may be yours and true and not copied but still beautiful and valuable. But it takes you much more time and energy to pursue it, and that’s why you’re copying.

What remains after imitation is the real life and looking deeper, it is in no way different from any other, but during all this time of conscious adjustment and imitation of alien achievements and role plays, you missed to see and appreciate with your own eyes. What is yours! As we imitate, we can not look and recognize the real, which is equally valid. But in our frantic desire for resemblance, because of unbelief in ourselves, we are blind to the truth, seen by all others, but ourselves.

What I propose as a concept is related to the idea of ​​the return of a revenant after a memory loss, after an accident the return from the no-man’s land, where is difficult to tell exactly what is there and where he was, because there is only a white spot in memory.

It is a kind of naming, a desire to recapture our memory, to overcome the dependence on copying and to occupy our place in the world, where we take boldly and responsibly what we say and think. Without fear of evaluating us or not, without being influenced more than the external evaluation in favor of our inner voice. Are we incapable of thinking alone, working in our lives as we want? Are we ready to accept all the wrong truths, to imitate and adopt as ours ?! The idea is related to the voluntary loss of memory due to stress experienced by the whole nation. The revenant is incapable of having his own context, and hence copies those values ​​that are offered and displayed to him. The sense of survival prevails and we adapt. White Spot Syndrome is not an isolated case in modern history, it is not a trademark of our country. Complying with the white spots of human history is a demanding priority for the great powers. There are many other white spots in world psycho-geography, but the act of declaring presence in the white spot is important for us as well as for the rest of the world. The world needs us, as we ourselves.

In parallel, a visit of a randomly selected class of high school students in the last class from Bulgaria to Venice is organized, just before the opening of the Biennale. Where, in addition to being given the opportunity to visit the city of Venice for free, they will sign and leave their Tag, name, logo on the specially made copy of the house wall in Koprivsthitsa. In the context of the theme of recovering from the white spot of loss of collective memory, the action provokes reflections on what is lost and what is not in our time. It is not by chance the choice of scratched wall of a house in Koprivshtitsa. Besides the association of the white spot in our memory, through the intentional scratching the upper blue layer of the plaster, in the outburst and the desire for the expression of the randomly chosen, deprived of any sense of cultural belonging, wrapped in oblivion, innocent adolescents;  the heights of the chosen location for the Bulgarian Pavilion – the last floor of Palazzo Lolín, remind us very much of the height level of the rooms in the houses in this Bulgarian Renaissance town, not higher than 2.60m. In an absolutely arbitrary or not, principle of choice of location for our National Pavilion, we are in line with our perception of inner potential and self-esteem. So, we are at home.

The action, as well as the whole journey of the group of students, is captured and projected in parallel in space as an integral art of the work at the opening. 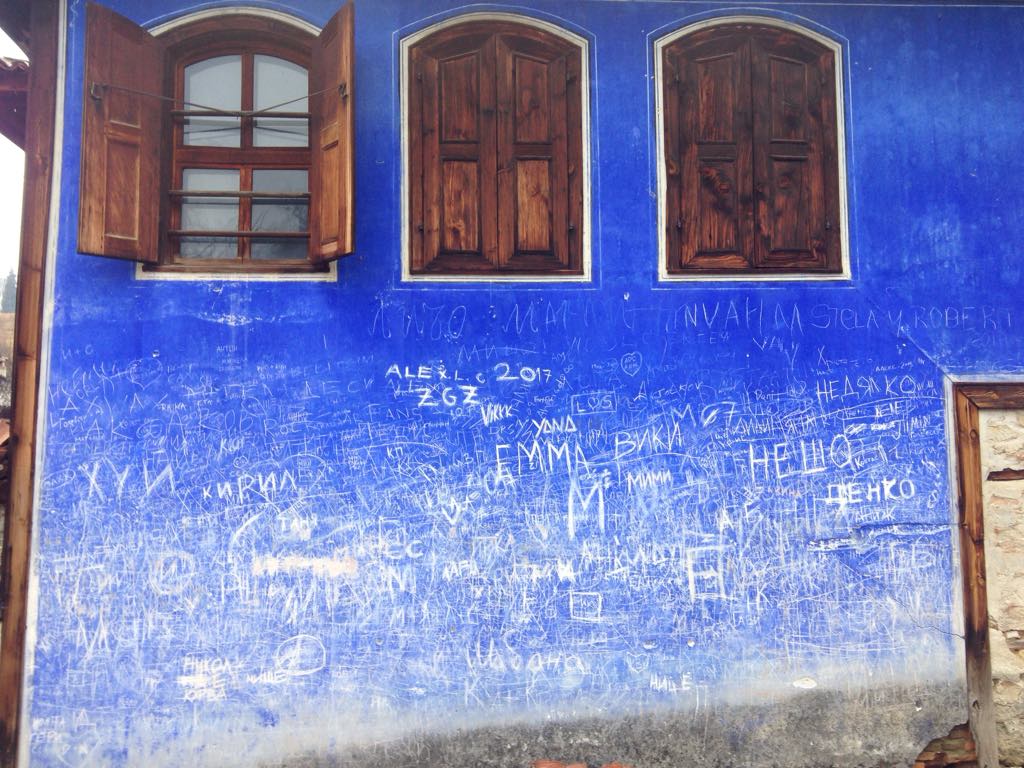 Separately, in each room there will be an artist presenting his work in space – a room, seen only when one enters the room. It is impossible to see whether and what is in the rooms from outside, because of the blind spot where the works are.

The artists selected by me are relatively young and unknown, and some of them are Bulgarians living abroad or of Bulgarian origin. Because, in my opinion, through their self-confidence and potential there is a better chance of returning our memory and our self-confidence as a nation. I have not mentioned to them that it is about taking part in the most prestigious event in the world of art – the National Pavilion at the Venice Biennale – just so not be stressed out of the responsibility and to prevent them from getting away from their true nature of creators. The works will be made specifically on the topic, and this is a process starting from the selection of the project by the commission until its appearance and installation in our National Pavilion.The submitted photo material is indicative and illustrative for each of the artists, and the lack of illustration is for those in the process. The technical requirements are structured to suit the principle of work and budget.

I believe that this is acceptable given the short deadlines that have been placed since the date of opening the invitation and applying the full information about the specific location and parameters of the Bulgarian Pavilion until the deadline for submission of proposals by the Ministry.

I believe that through the project I have presented, we have the chance to present for the first time in 30 years Bulgaria at this prestigious forum, as decent citizens of the world. With a great deal of self-irony and at the same time posing important questions about the vision of a common future where a small country like ours has a reason to play on the world chess field of contemporary art.

Click here to cancel reply.
The Social Function of the Arts by Vivi Kieffer
Still now is then forever by Andy Broadey