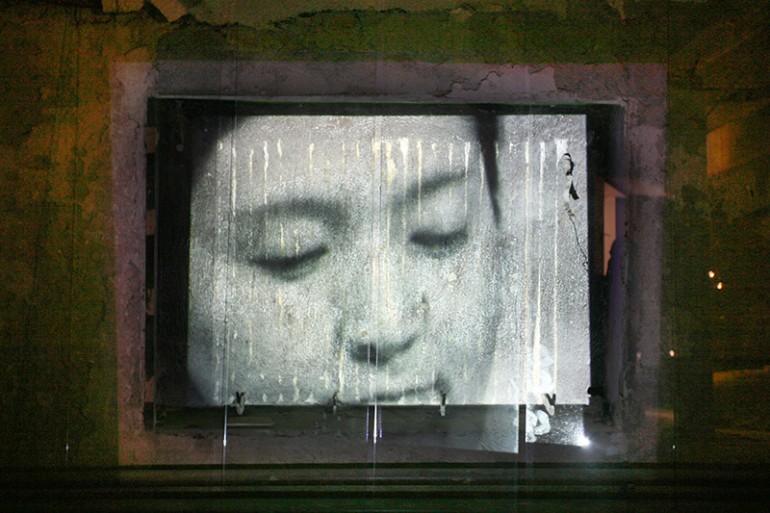 The first time I arrived in Sofia about three years ago, the young architects Maria Petkowa and Desislava Nencheva welcomed me at the airport. Mario (Hostel Lavele) drove us by his own car to the center of Sofia. Downtown the first thing I noticed was the really fresh air. From my own experience – I have been traveling around – I know that it is a rare thing to be able to breath in clean air in the center of a big city.

The motive for me to come to Sofia was the invitation of Nia Pushkarova, the initiator and organizer of the Water Tower Art Fest. In one of the locations, the restored Central Mineral Bath of Sofia, I constructed with the help of the young architect Olga Doreva an architectural glass sculpture (glass pavilion) in a monumental space with a beautiful tiled floor and a double row of strong pillars. The design for the glass sculpture I made in advance was based on the plans and pictures of the space the festival send to me. On the spot Olga and me adjusted the glass structure to create a real site specific installation.

It was not only a period of building up as a participating artist and designer and as a visitor of the enjoyable festival, but it was also an explicit opportunity for me to discover the city of Sofia. Based on their study background – architecture and city planning – and their catching idealism, Olga, Maria, Desislava and Radoslav Nikolaev (who joined us later) turned out to be real ambassadors of the spatial and functional history and even more of the present and future of Sofia and Bulgaria. The various excursions they led me in unfolded a city which is in an ingenious way veined by green radials, whereby cold fresh air ‘rolls’ in the city from the surrounding mountains and rises up again in the heart of Sofia because of the warmth of the sun. A convection by nature keeps the circulation of clean air going thanks to the ancient but very sophisticated way of city planning of the Thracian.

The green network of parks rolls out the ‘carpet’ for daily animated city life in the open air. Particularly during the summer from early in the morning until late at night. Polina Pankova, my favorite coordinator of the festival and graphic designer Denitsa Toneva, guided me along the hidden but vibrant places of Sofia. Being a little bit out of the sight of the legislature, you come definitely to the conclusion that Sofia is very much alive and inspiring.

In the meantime I got to know Sofia better because I also created two projects during the festival last year, again with the help of Olga Doreva. One project near Pancharevo Lake was a rather spectacular performance with a fragile structure build up with glass blades and balloons which crashes down at the end and a more sedate glass installation in Serdica Basement (ROCA building) related to the remains of the Roman wall and typical triangle fortification. The center of Sofia is build over the foundations of the Roman city of Serdica.

During the last opening hours of the glass installation in Serdica Basement, architect Vasil Kitov came to look at it. A few days earlier I visited the St. Sofia Church, where he showed to a group of students which I could join his restoration of the tombs under the vaults. Before that as part of my exploring expeditions along the city I visited the medieval church of Bojana, part of the world (Unesco) heritage. Vasil Kitov led this restoration as well, with a really excellent and amazing result.

After his visit to Serdica basement Kitov invited Olga and me to the restoration and building site of Metro Station Serdica. That is the place where centuries of ancient, medieval, renaissance, Ottoman and socialistic history come together in a present day development area in the center of Sofia. A real adventure in terms of extension of the public transport system in combination with increasing historical awareness by the passengers of the new extended metro station.

From my point of view Water Tower Art Fest is a unique festival. Especially for a person like me who is continuously working on the edge of art and city landscape and who has many times been involved in animation and reanimation of the built and rural environment in various regions. Ultimately, the festival operates rather directly in order to bring the ‘hidden treasures’ of Sofia to the surface. The festival invites artists and designers from all over the world to give them artistic opportunities to articulate and value important but ‘forgotten’ buildings and sites of Sofia in a surprising and at the same time meaningful way. The idea of the festival is as clear as plain day-light. The people who are involved want to contribute to awareness, development and manifestation of the identity of nowadays Sofia and Bulgaria as part of the international community.

Kalina Petkova who is also involved with Water Tower Art Fest showed me amongst other things two interesting places in Sofia. One was the Monument of the Bells, initiated by Lyudmila Zhivkova and inspired by the Year of the Child (1979). This monument symbolizes the ambition to raise all children in a world of beauty. The other one was the Grindhouse Skate Club. A similar place ‘Hall of Fame’ is developed by the young generations in my home town Tilburg in The Netherlands. I introduced her and than she connected the two places and organized a skate manifestation in the Grindhouse in collaboration with members of both the skate communities in Tilburg and Sofia. A very nice event which brought two young dynamic communities together.

Sofia City Bar is the name of my latest exhibition in Luycks Gallery Tilburg (NL). All the pieces of art reflected my stay in Sofia and other regions of Bulgaria. For many visitors the exhibition was a real eye-opener. Mostly they have heard about Sofia and Bulgaria but don’t know very much about the city and the country. Looking at my exhibition people were surprised by the liveliness of the eastern way of live and its expressive architecture and landscape.

This year I am going to take part of the festival again and will create a monumental glass and sound installation at the Royal Station Sofia Kazichene. Long time ago it was a beautiful building but nowadays it is an abandoned ruin. I imagine how important this building once was for the relationship between Sofia and Bulgaria and other countries and also as a connecting link towards the Asian part of the world. The building is in fact a kind of expression of modern unity.

The value of the Water Tower Art Fest is in my opinion beyond dispute. It is a fine example of how to connect in a very basic way art and architecture in order to bring the past to live, make a match to the present and open the window to the future of Sofia and Bulgaria as a valuable member of the international community. And all thanks to the altruistic dedication of the younger generations of Sofia and the surrounding regions, who succeed to involve many artists and designers with the Water Tower Art Fest.

I look forward to drinking a small beer in Hambara or in the City park at the National Theatre.